A Month's Worth of Race Updates!

Wow it has been a whirlwind of a few weeks. May is nearly over, and I have had 9 race days already since the last update in Redlands, CA: Dana Point Criterium, Redlands Bicycle Classic, the Chrono & GP Gatineau & Bristol Mountain Road Race. With a fairly packed last few months, I am really looking forward to being around home, training and working, in preparation for Nationals at the end of June.

Alright, I will dive right into the racing, and give you the two-minute highlight reel of the last month.

Dana-Point GP, part of the US Pro Road tour, is a one day event in beautiful Orange County. Jamie, Ashley, Karlee and myself headed to the race, and we were very excited to spend a bit of time on the coast. The race was fast and exciting. I went on an early attack and break, and took both intermediate lap primes (for those who don't know, a prime is a prize awarded to the first person to cross the line on some intermediate laps - usually money :) . Jamie finished the race in 4th, and three of us finished in the prize money! 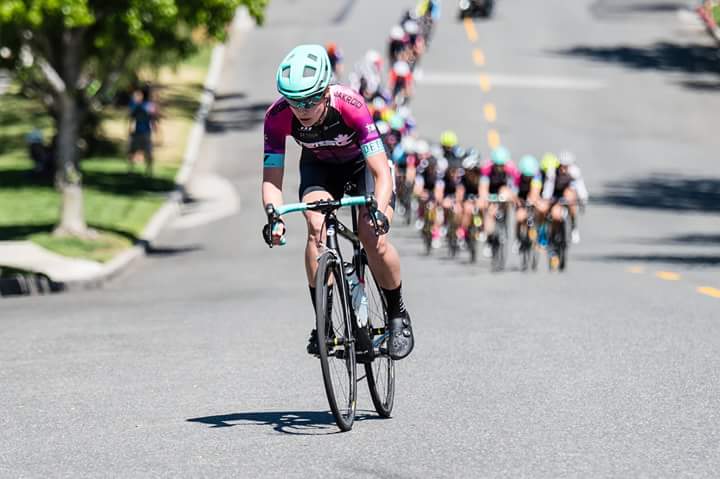 Redlands  - what to say about this absolutely iconic race? It was the best of times, it was the worst of times... A race where just finishing felt like a huge accomplishment. The tough kind of race where you finish ready to up the training level, hungry to race again, but also wondering what kind of crazy you need to be to keep hitting up that start line. 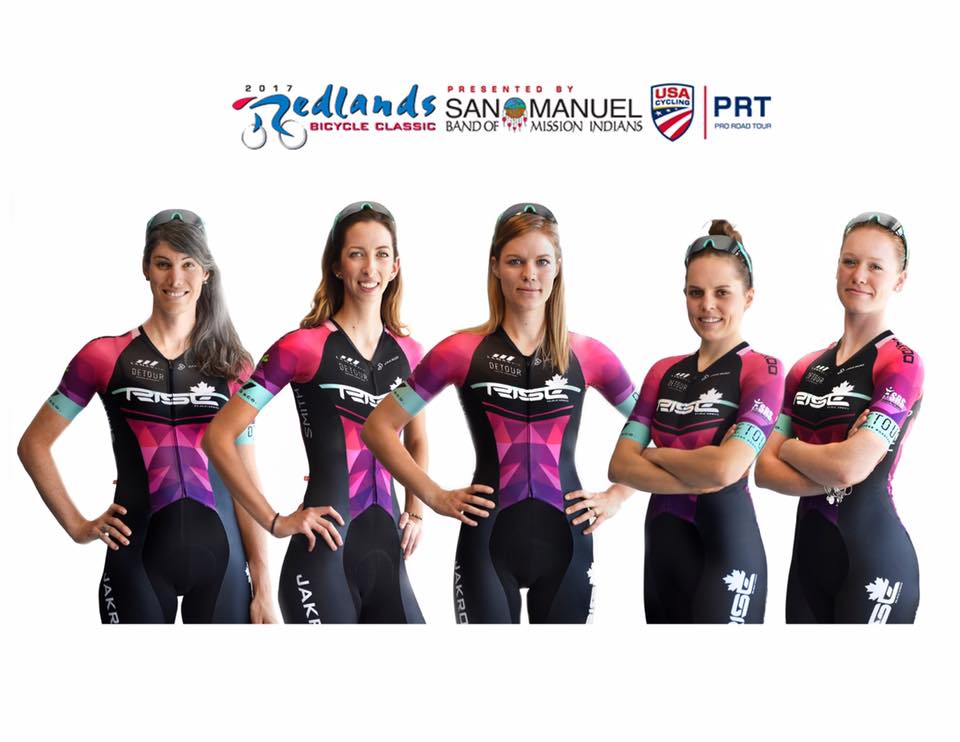 With my Cervelo S5 prepped for the Time Trial, I was ready to start the second 5-day stage race of the year. After a short and fast race, I finished in 26th, just 30 seconds outside of the top 10. 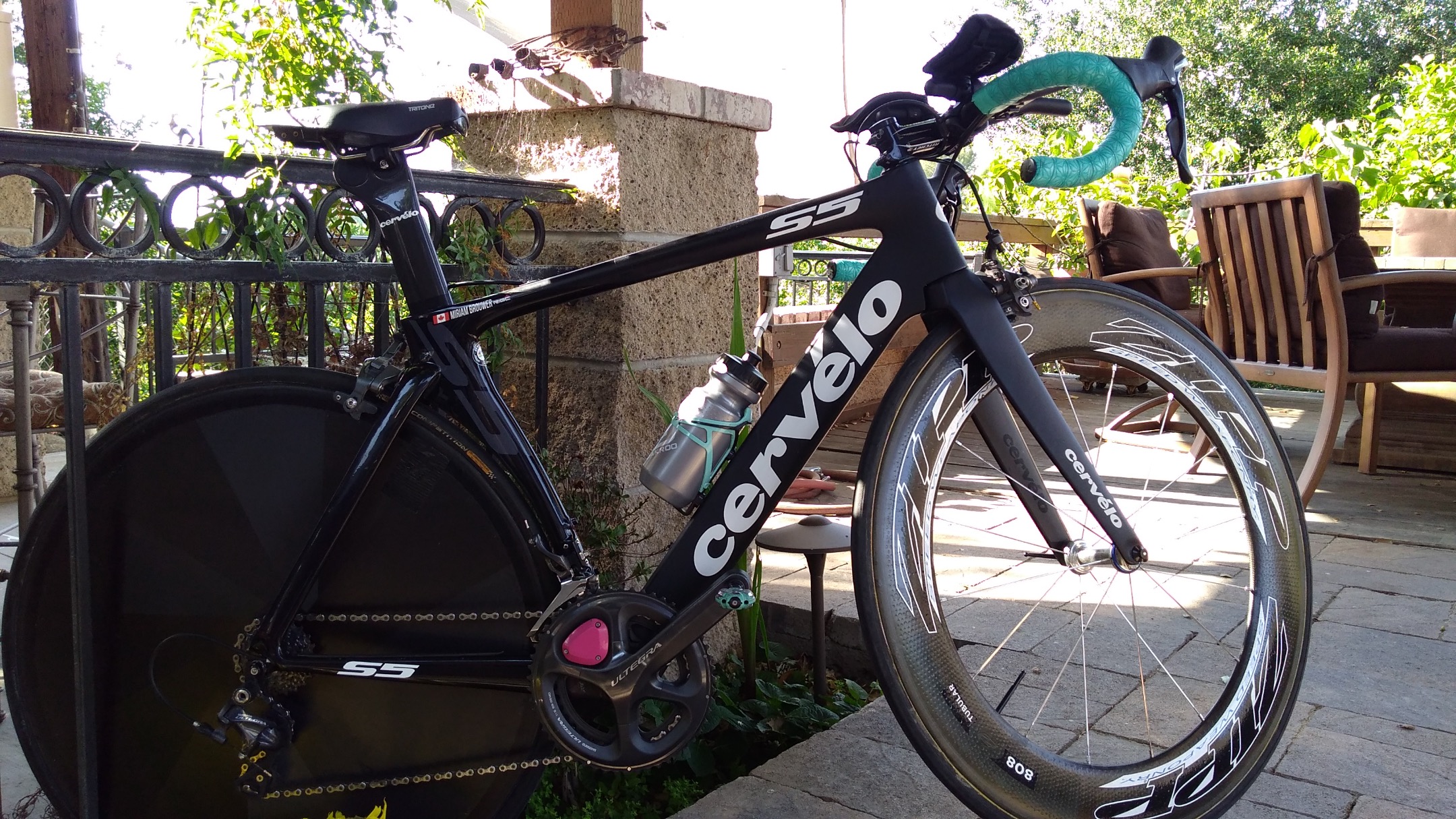 Day two was where the race GC would be made, 4 laps of a rolling 20 km circuit, followed by a 10 km drag to the finish line at the summit of Oak Glen. What to say about this day? It was HOT, with an average ride temperature around 40 degrees, no wind and an added bonus of humidity. The heat proved to be the deciding factor of the day, and many of us struggled to arrive at and summit that final climb. With about 6 kms to go, i could no longer hold the pace of the leaders as World TT champ, Amber Neben and climber extraordinaire, Katie Hall attacked and shattered what was left of the field. Although I lost a lot of time on the leaders, I was too destroyed to be disappointed! We hurried home and began the recovery process, not an easy task after a day like that! Stage racing can be a cruel sport, with 10% time cuts (if you finish greater than 10% over the time of the winner, you are not allowed to begin the next day). We were sad to lose two of our team members to this at the end of stage 2. 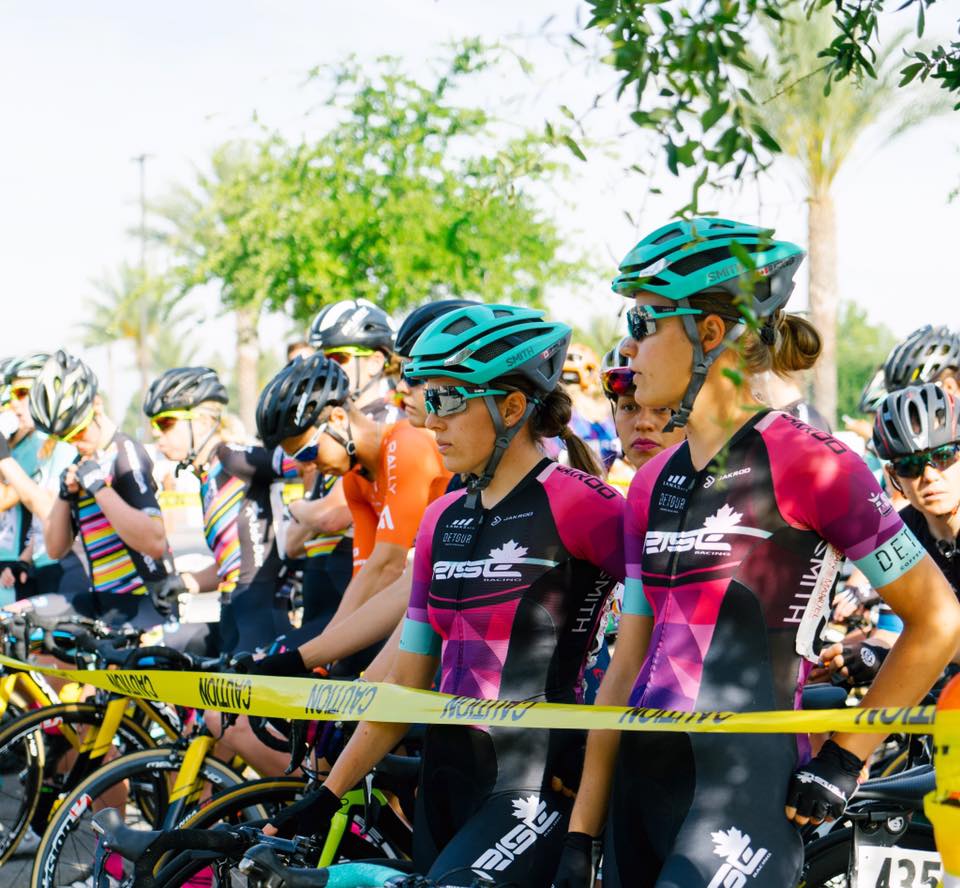 The third day involved 14 laps of a short, technical circuit, with a challenging punchy climb. Jamie made an impressive break from the field early on, which allowed the rest of us a chance to sit in, covering the occasional attack as necessary. The break was caught with a few laps to go, and four of us lived to fight another day in the  criterium.

The technical criterium circuit was raced absolutely furiously, not that we expected any less. Claire Rose, of DNA cycling attacked nearly immediately and made a solo break. Jamie made it into a select breakaway group chasing her down.  This break was caught, but Claire, impressively held on for the win, holding out against the strong United Healthcare train! Jamie was positioned perfectly for a strong finish, but suffered an unfortunate flat with 2 laps to go. At the end of the day, only three of the Rise Racing riders remained within time cut going into the final stage. 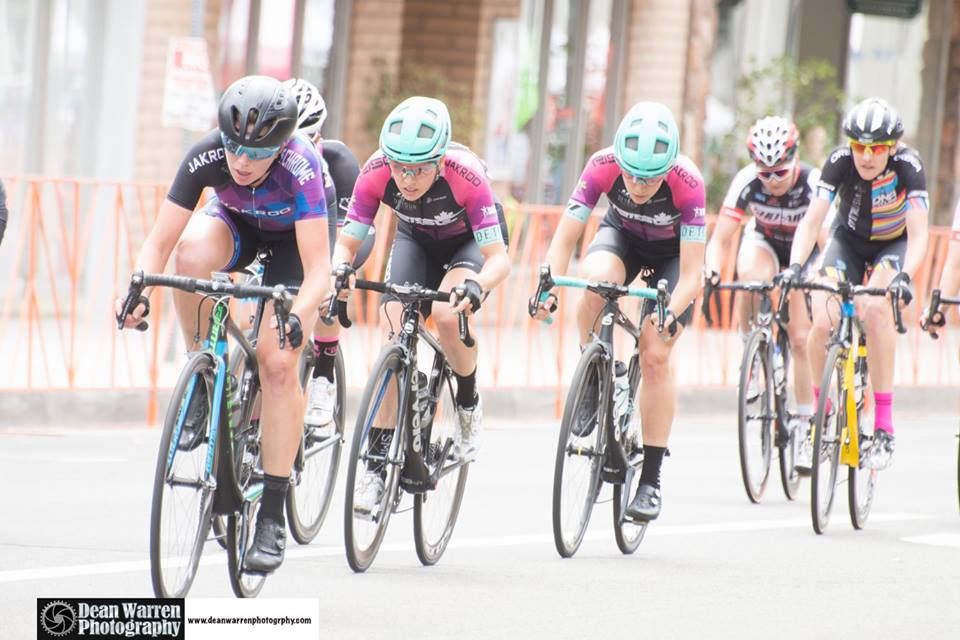 Day five's sunset loop was epic, to say the least. An extremely technical circuit with a challenging climb and ripping fast descent through the residential streets of Redlands, CA. An early break went in the first lap and UHC's Ruth Winder made an impressive move on the 6th of 9 circuit laps, getting away off the front and shedding many (including myself) out the back of the quickly dwindling field. Ruth, in impressive fashion, went on to catch the break, and make up over 2 minutes on current race leader Amber Neben, giving her the GC win after 5 challenging race days.

It was an amazing three week block of racing, and I was so happy to see my progress over last season. I was very excited to be heading home, however, and super eager to see Mark!

Once home, I had about a week and a half to prepare for the UCI Chrono and Grand Prix races in Gatineau, QC. It was really amazing to be able to travel to this race with my sister, Lindsay.  Knowing she was sitting in the passenger seat of the team follow car during both the time trial and road race, gave me that extra little bit of motivation to dig deep! 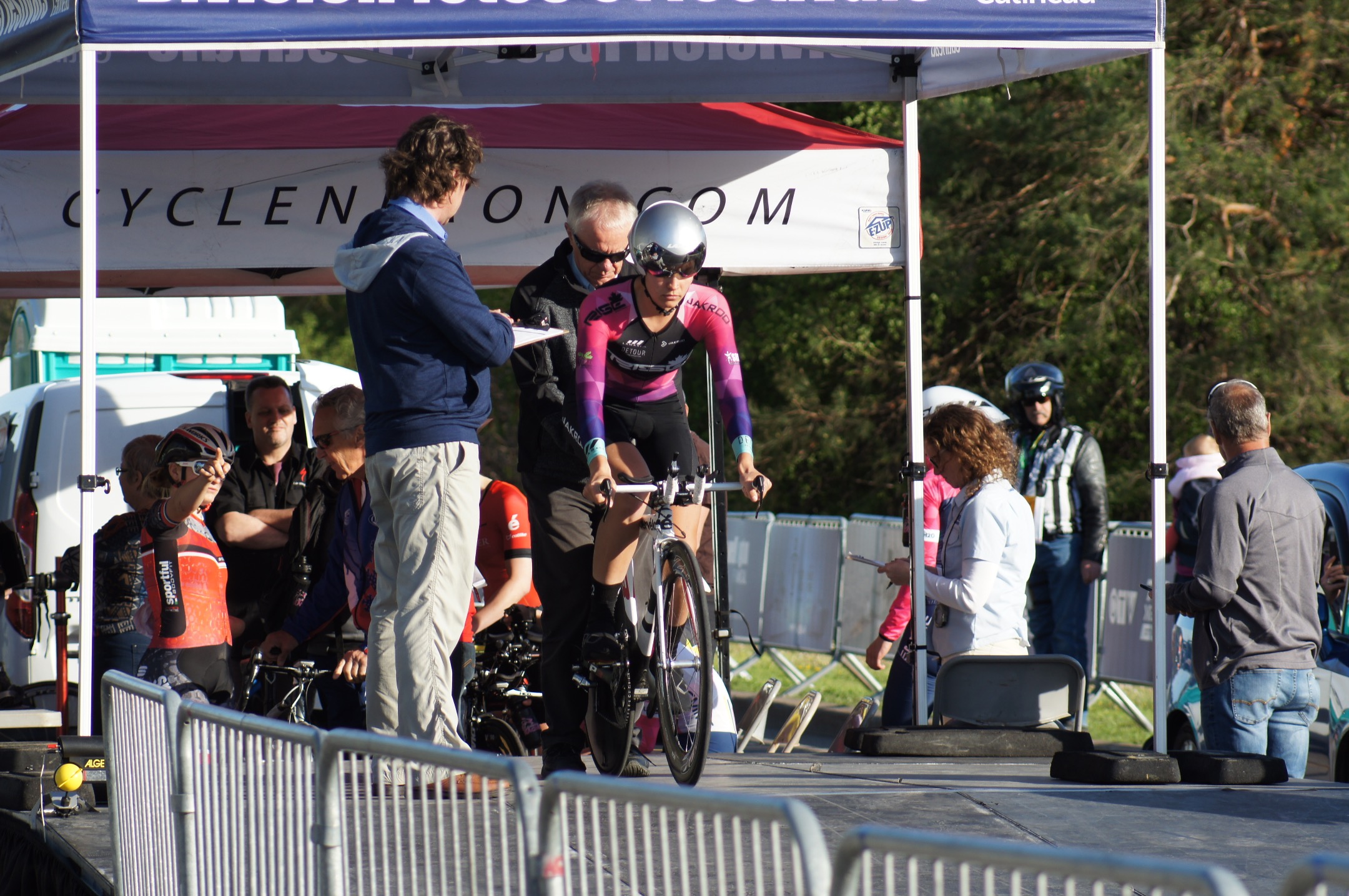 The Chrono Gatineau was a 21 km, out and back time trial in Gatineau park, primarily uphill for 10 kms, turn around, and race back down the hill, into a technical finishing section including an on-ramp and round about.

I was very excited to be able to race my Cervelo P3 for the first time this year and was able to put out a personal best power for the 32 minute individual race. 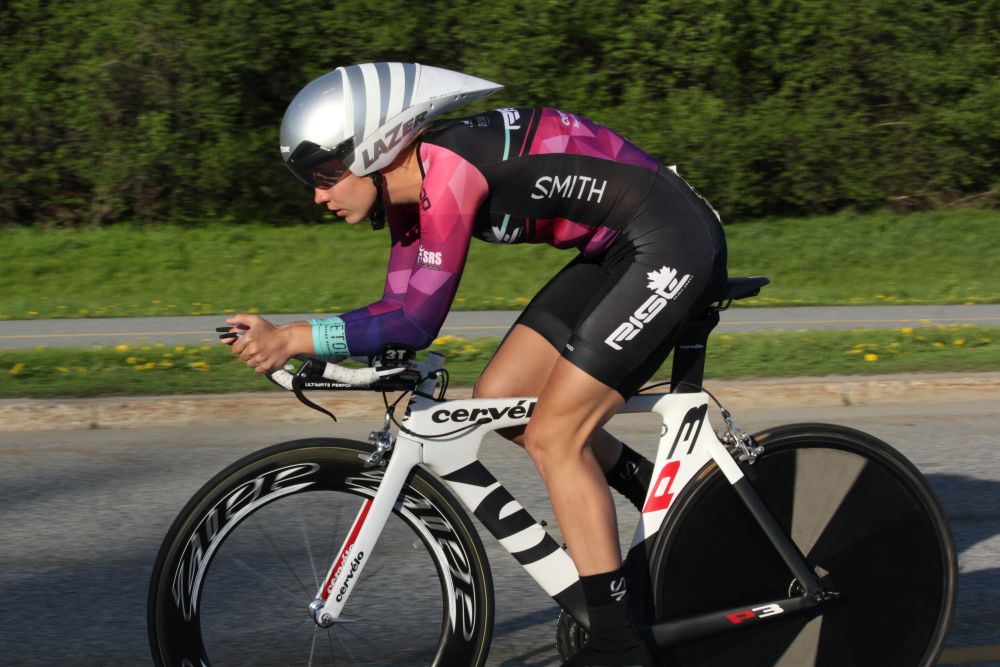 Finishing 18th overall in a talented field, I was happy to earn my first UCI point. My 17 y.o. teammate, Ruby West, finished an impressive 23rd overall!

Grand Prix Gatineau is a road race that begins with two laps of Gatineau park, and 5 short, technical parkway loops into an uphill finishing sprint. 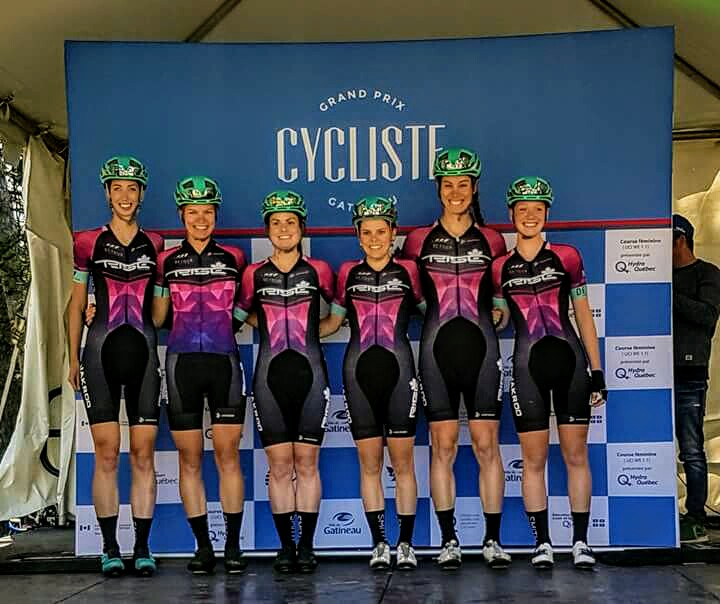 Although our leadout timing was off coming into the final lap and finish sprint, the team still secured 9th and 11th place finishes by sprinters Karlee and Jamie, respectively. 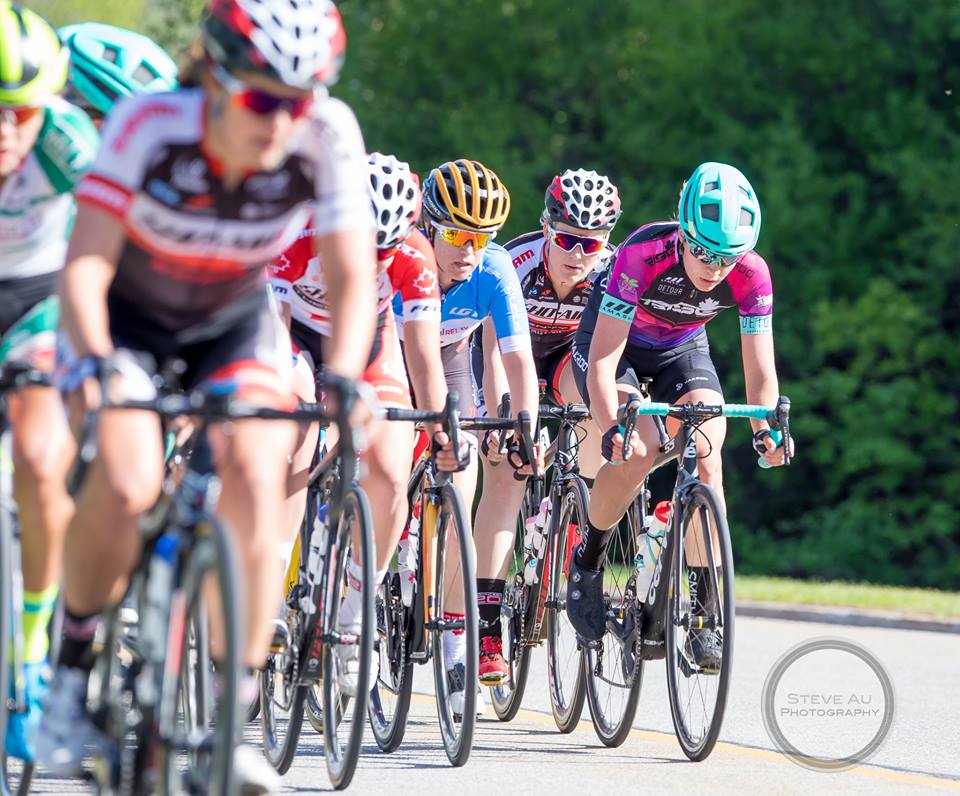 Photo credit to Steve Au, who captured a ton of great shots of the day. 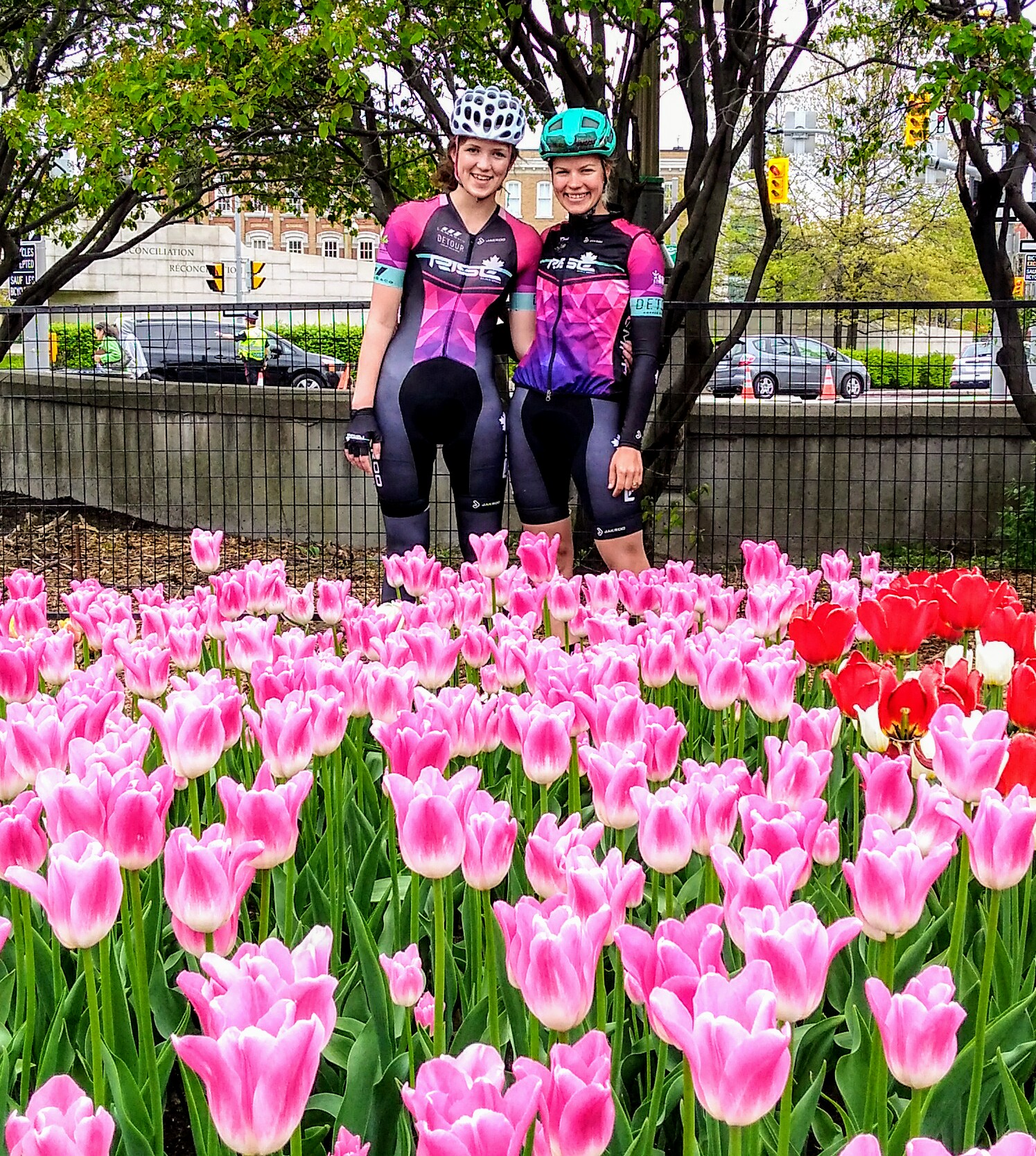 Ok, we made it to the last race update! And this one is actually on time :) Yesterday, Mark and I made the short trip to Bristol Mountain Road race in Canandaigua, NY. We raced this last year as well, and absolutely loved the hilly, scenic race course! I was really looking forward to hitting it up again, and trying to repeat on the top step of the podium.

The race involved 6 laps of a 15 km circuit, with a solid 5 km long climb. After an easy first lap, we hit the steepest parts of the climb HARD! I was a little bit unsure of how my legs would react to a deep effort, as I had a really tough workout the day before the race. Apparently all the stage racing over the past few weeks has paid off, because I managed to get some separation with other Ontario racer, Emily Marcolini. We worked together and quickly gained minutes over the rest of the peleton. As the laps went on, we eased off the pace a little bit, knowing that we were comfortably in the lead over the rest of the riders. On the 6th and final lap, I put in a dig half way up the climb, opened up a gap and rode solo for the final 12 kms to take the win. 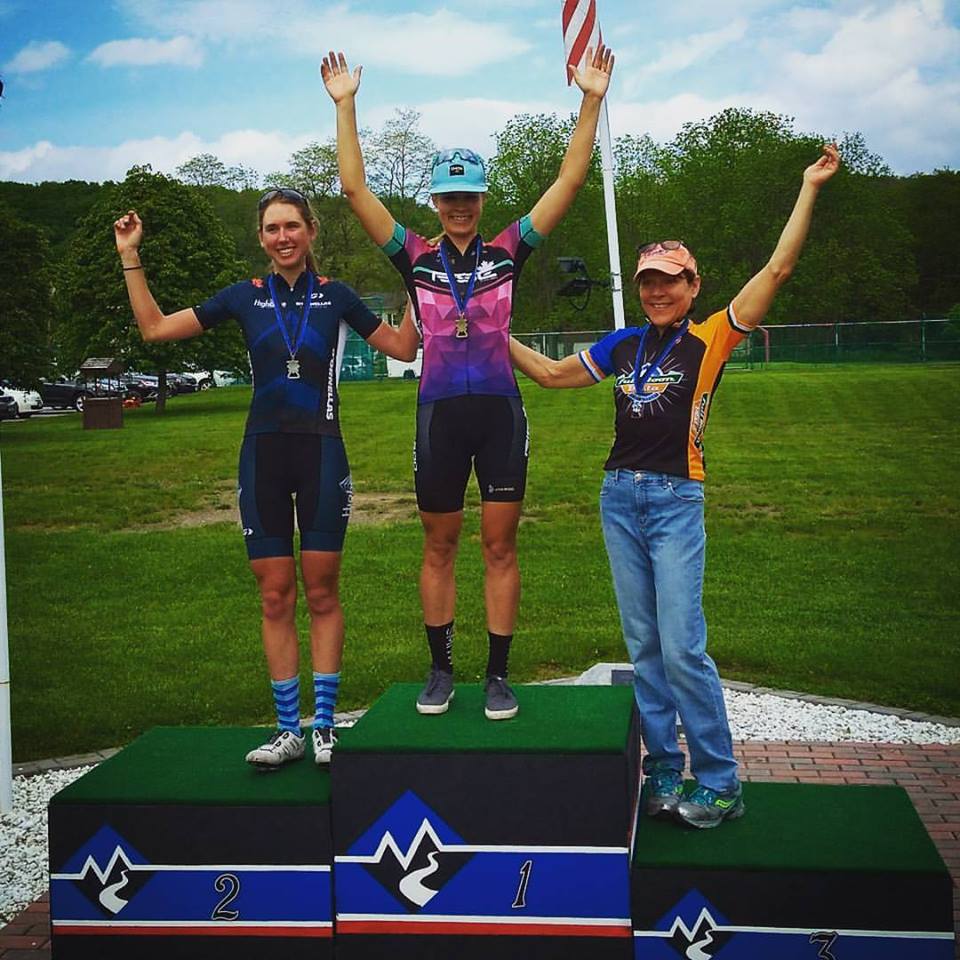 I am really excited to be around home for the next 4 weeks, spending time with Mark (we celebrate our 4 year anniversary this week!) and training in preparation for the Canadian National championships in June. Thanks for sticking with me til the end of this long and overdue race update. It has been so amazing to receive encouragement and support from so many of you over the past months! All of your support means so much to me, and inspires my training and racing on a daily basis. Now, lets hope this sunshine keeps up in Southern Ontario and that summer weather is here to stay.